skip to main | skip to sidebar

Yes, I know. Halloween is long gone. But I was about to post some Christmas things and realized that I hadn't finished Halloween.

This year, Spencer wanted to be a Jedi. He's never seen Star Wars, and doesn't know the characters all that well (and neither do I), but after doing some research online, I came up with this costume for him: 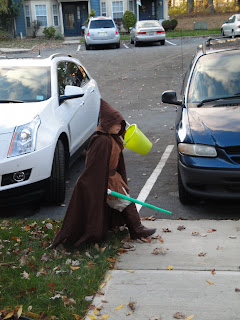 As far as I know, there are no child's Jedi costume patterns in print, so I had to combine patterns to make up my own. I used:
McCalls 6184 (the karate outfit view) to make the wrap-around shirt and the pants,
Butterick 3244 (the astronaut view) to make the the belt and boot cover,
and Simplicity 5512 for the cape.

He loved it. I make it a little large so that he could wear it for a few years.

Waimea wasn't sure which princess she wanted to be for Halloween, but it had to be a princess. Back in August I found a pattern for a Cinderella and a Snow White dress (Simplicity 2817), and made her those two, and manipulated the pattern to make her a Belle dress as well. On Halloween night she decided she wanted to be Snow White. She wouldn't let me fix her bow properly, and she's wearing a long-sleeve shirt underneath, but still I think she makes a pretty convincing Snow White (minus the hair color, of course): 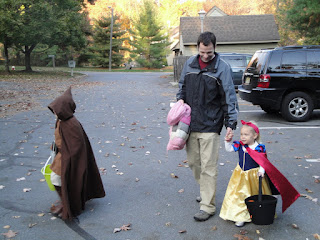 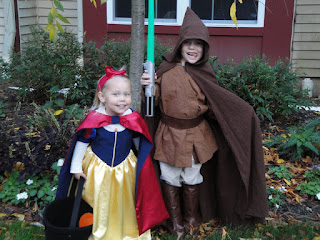 I'm not great at originality, but I love to recreate. This blog is dedicated to showcasing my work, whether it be original or copied.

Let me know what you think.